Edith Cavell: The Germans close in 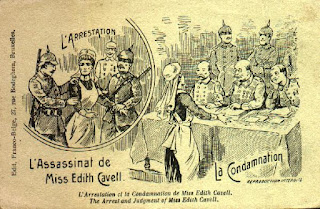 "Suspicious men not familiar with the password began coming to the clinic, asking for help. There were more random searches. Then, on July 31, the German secret police suddenly appeared at the Brussels home of Philippe Baucq and arrested him. Louise Thuliez, who had been staying with the Baucq family for the night, was also arrested. Over the next five days, 35 people involved in the escape network were taken into German custody.

Prince Reginald de Croy managed to get word to those not yet arrested, including Edith Cavell, urging them to go into hiding. Edith, who didn't think she had a chance of escape, chose instead to wait for the inevitable while destroying any letters that might incriminate her or anyone else.

On the afternoon of August 5, officers from the German secret police -- Pinkhoff and Mayer -- arrived at the clinic..."

From "Edith Cavell: Patriotism is Not Enough" from Women Heroes of World War I: 16 Remarkable Resisters, Soldiers, Spies, and Medics.

Posted by Kathryn Atwood at 6:46 AM No comments: 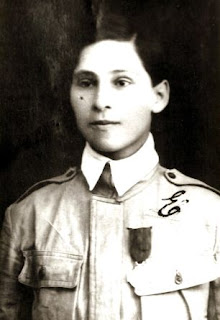 "On November 4, 1916, the soldiers from Ecaterina's regiment defending the south side of Targu Jiu were outnumbered and nearly surrounded by the Germans, who requested that they surrender and become prisoners. when the Germans approached, Ecaterina stepped forward out of the lines and explained, in German, that the regiment had decided to surrender. Then she suddenly began shooting, killing several Germans., In the confusion that followed, most of the company was able to escape while Ecaterina and several other soldiers were captured..." 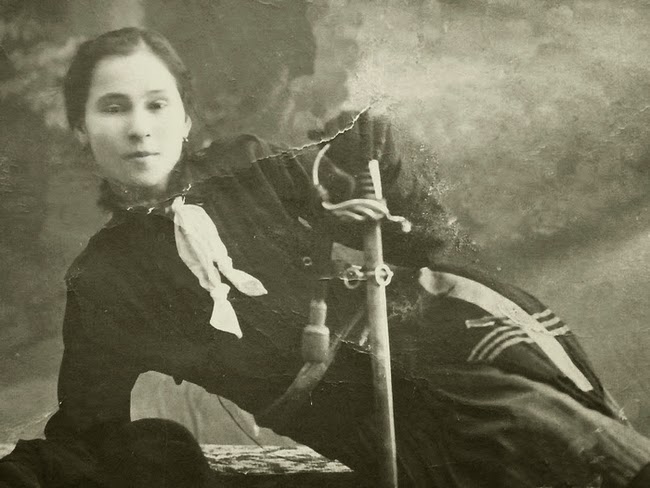 "...Ecaterina decided to fight beside her brother Nicolae, who was now a sergeant-instructor. Though not officially part of Nicholae's regiment, Ecaterina was accepted by them all as an unofficial fellow-soldier. One of the regiment officers, Major Liviu Teieseanu, later said that during this time Ecaterina was a "True example fo the soldiers," patiently enduring with them "the brunt of war" and participating in all their actions, even dangerous bayonet charges.

One day, Ecaterina -- just a little ways off from her brother -- heard the whistle of a shell coming closer and closer. It fell near Nicolae and killed him instantly.

Wanting to avenge her brother's death, Ecaterina requested to serve in his place. Romanian women weren't normally allowed to be part of the military, but understanding the sincere and intense motive behind Ecaterina's request, the military leaders agreed."


From "Ecaterina Teodoroiu: Lieutenant Girl" from Women Heroes of World War I. 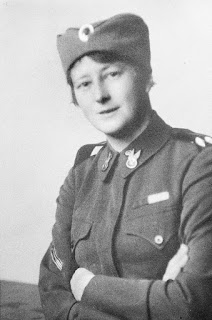 "Back in Salonika, where the Allied armies were regrouping, the [Scottish Women's Hospitals] staff set up another hospital in the midst of a very wet, muddy winter. Olive was very busy but in a mundane sort of way. She wrote to her father that her real dream was to be "in the thick of things." She was also growing tired of how the matron seemed more interested in rule enforcement than in making the workers feel appreciated. And Olive's new romance with a Serbian officer -- Captain Milan Yovitchitch -- was beginning to clash with the SWH's close supervision of its off-duty employees. So in the summer of 1916 Olive quit the SWH and joined the Serbian army as an ambulance driver attached to medical headquarters. She moved into an apartment with two other female ambulance drivers who had also just left the SWH."

Excerpt from: "Olive King: Adventurous Ambulance Driver" from Women Heroes of World War I.
Posted by Kathryn Atwood at 12:12 PM No comments:

The last moments of Edith Cavell 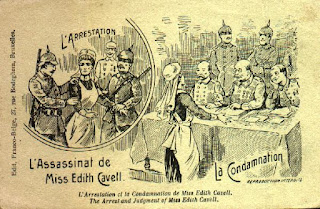 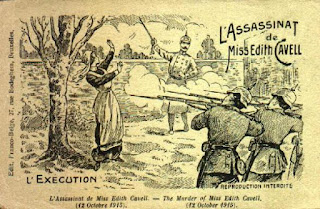 Early in the morning of October 12, 1915, Edith was taken by car to the Tir National shooting range. Philippe Baucq was to be shot with her. Their sentences were read aloud before a large group of German soldiers. The firing squad of 16 was advised to not hesitate to shoot the woman before them: the nature of her crimes deserved it. Pastor Le Seur was with her and she asked him to relay a message to Rev. Gahan. Speaking in French, she asked that her mother be told that her soul was safe, her conscience at peace, and that "Je meurs pour Dieu et ma patri" (she was dying for God and her country).

Pastor Le Seur then led her to the pole and waited while she was loosely tied and blindfolded...


Excerpt from "Edith Cavell: Patriotism is not Enough" from Women Heroes of World War I: 16 Remarkable Resisters, Spies, Soldiers, and Medics.
Posted by Kathryn Atwood at 9:57 AM No comments:

The trial and sentencing of Edith Cavell 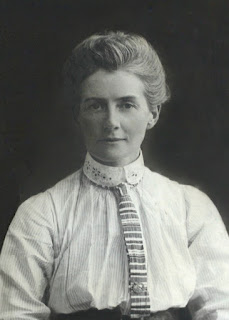 
On October 7, 35 resisters were tried as a group in Belgium's senate chamber. Edith was the first defendant to take the stand. She was asked, "Do you realize that by [helping men escape] it has been to the disadvantage of Germany and to the advantage of the enemy?" Edith replied, "My aim was not to help your enemy but to help those men who asked for my help to reach the frontier. Once across the frontier, they were free."

On October 11, the defendants were marched into a room in the Saint-Gilles prison to hear their sentences read. Some of them were acquitted; some were sentenced to hard labor and others to prison. Five of them heard their names read followed by the German word todesstrafe: the death penalty. One of these was Edith Cavell.

A German pastor named Paul Le Seur escorted Edith to her cell and was given the task of telling her she had only hours to live: her sentence was to be carried out the very next day at dawn.

From "Edith Cavell: Patriotism is Not Enough" from Women Heroes of World War I: 16 Remarkable Resisters, Spies, Soldiers, and Medics.
Posted by Kathryn Atwood at 1:22 PM No comments: 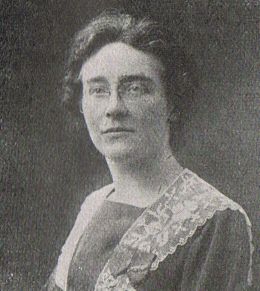 
"Louise, Philippe, Edith, and many others were all brought to trial on the same day, October 7, 1915. Louise was called to the stand directly after Edith. She was asked many questions designed to reveal the organization system of the escape network; the Germans wanted to know who was in charge. But they were disappointed: this group has worked together on terms of equality. There was no "chief."

When they had finished questioning Louise, and she was in the process of returning to her seat, the prosecutor suddenly asked her one  more question: What was her motive for becoming involved in rescuing Allied soldiers? "Because I am a Frenchwoman" she replied.

All of the court proceedings were conducted in German, with French translations for the prisoners. When they heard their sentences read on October 11, the prisoners heard one German word repeated five times: "Todesstrafe." When the interpreter read the sentences in French, they realized what Todesstrafe meant: five of them, including Philippe, Edith, and Louise, had been sentenced to death.

Louise woke up at six the following morning with a feeling of dread. 'I am afraid,' she said to her cellmate, 'afraid for Edith Cavell.'"

From "Louise Thuliez: Because I am a Frenchwoman" from Women Heroes of World War I: 16 Remarkable Resisters, Soldiers, Spies and Medics.

Posted by Kathryn Atwood at 12:53 PM No comments: 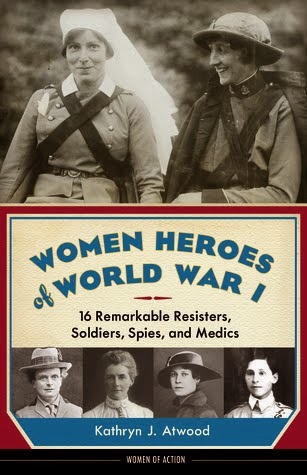 Kathryn Atwood
Author of young adult collective biographies on women in war (www.kathrynatwood.com). Other half of "History Singers" duo (www.historysingers.com).